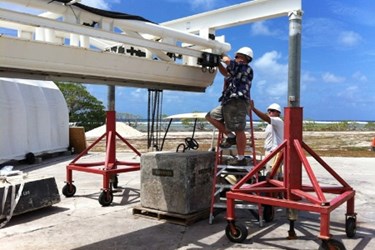 A NASA-funded sounding rocket mission will launch from an atoll in the Pacific in the next few weeks to help scientists better understand and predict the electrical storms in Earth's upper atmosphere. These storms can interfere with satellite communication and global positioning signals.

The mission, called EVEX, for the Equatorial Vortex Experiment, will launch two rockets for a twelve-minute journey through the equatorial ionosphere above the South Pacific. The launch window for the mission from the Kwajalein Atoll in the Marshall Islands is from April 27 to May 10, 2013.

The ionosphere is a crucial layer of charged particles surrounding our planet. This layer serves as the medium through which high frequency radio waves – such as those sent down to the ground by global positioning system (GPS) satellites or, indeed, any satellite communicating with Earth – travel. The ionosphere begins about 60 miles above the ground and is filled with electrons and ions, alongside the more familiar extension of our electrically neutral atmosphere. Governed by Earth’s magnetic field, high-altitude winds, and incoming material and energy from the sun, the ionosphere can be calm in certain places or times of day, and quite turbulent at others.

This area of the ionosphere is known for calm days and tempestuous nights, times when the ionosphere becomes rippled like a funhouse mirror, disturbing radio signals, and introducing GPS errors of a half mile or more. The two rockets will measure events in two separate regions of the ionosphere to see how they work together to drive the ionosphere from placid and smooth to violently disturbed. Such information could ultimately lead to the ability to accurately forecast this important aspect of space weather. “We’re looking at the two highest regions of the equatorial ionosphere, called the E- and F- regions,” says Erhan Kudeki, the principal investigator for the mission at the University of Illinois in Urbana-Champaign. “Violent ionospheric storms can occur in the equatorial F-region a few hours after sunset and if we can better understand what causes these storms, we’ll be able to better mitigate their effects on communication and navigation systems.”

The mission team will wait for the first signs of turbulence developing before launching both rockets. The research goal is to study whether turbulence at sunset in the E-region of the ionosphere could serve as a warning of storms in the higher F-region an hour or two later, so the team plans to launch on an evening when ground based radar shows the necessary turbulence in the E-region.

When the conditions are just right, the team will launch a rocket to travel up to a height of 220 miles. They will launch the second rocket two minutes later that will travel up to 120 miles. By staggering the timing of the launches, the two rockets will be able to gather data simultaneously at two altitudes through the ionosphere as they travel their independent trajectories. Before they splash down into the ocean, the two rockets will record data about the electric fields and the density of the charged particles in the region.

Each rocket will also release a stream of lithium or trimethylaluminum (TMA) that can be seen from the ground. When TMA is exposed to the air it turns into aluminum oxide, carbon dioxide and water vapor, all three of which occur naturally in the atmosphere Groups of scientists at various locations on the atoll will observe the lithium and TMA as it blows in the wind. Together, the observations can be triangulated to show how the neutral wind moved during the flight.

“Neutral winds are one of the hardest things to study,” says Doug Rowland, an EVEX team member at NASA’s Goddard Space Flight Center in Greenbelt, Md. “One can’t physically see the wind, and it is difficult to measure from the ground, so we use the TMA as a tracer.”

The neutral winds are believed to be an important part of what causes the ionosphere storms. A mission called EQUIS-2 (Equatorial Ionospheric Study) held in Kwajalein in 2004, gathered data that hinted at a correlation between these neutral winds and the upper ionosphere. The theory is that near sunset, strong eastward neutral winds through the F-region, which begins at 120 miles up, may cause fine scale turbulence in the E-region as well as a strong current and vortex-like circulation in the F-region, leading one to two hours later to a kind of ionospheric storm called “spread F.” The movement of spread F throughout the charged ionosphere involves bubbles of material rising up through the atmosphere, not unlike the way colored blobs move upward through a lava lamp due to differences in heat and density.

It is just these moving blobs that can disrupt communications from satellites, so scientists would like to find a simple advance warning in the atmosphere that can be detected from the ground. Vortexes in the E-region can be spotted with the radar and could serve as an efficient telltale for radio-disturbing turbulence above – if observations from a mission like EVEX show that they are, in fact, correlated. “Using radar and sounding rockets simultaneously as in this mission is the only way to gather complete information needed to understand the conjectured couplings of perturbations in these two regions of the equatorial ionosphere,” says Kudecki. “There are plenty of radar data about these types of ionospheric storms, but the additional in-situ data to be provided by the EVEX rockets will be crucial in sorting out which theoretical models work best to explain what is really going on during these ionospheric storms.”

With two sounding rockets, a multitude of ground radar sites, and instruments to measure a suite of information about both charged and neutral particles, scientists using EVEX data will be able to study the equatorial ionosphere as a system -- understanding how one characteristic effects another – in a way that has never been done before.